Marketing and the Familiarity Principle

Marketing and the Familiarity Principle: Another month, another blog post on consumer psychology and how understanding your customers at a subconscious level can help boost your marketing effectiveness. This month, we explore the familiarity principle – also sometimes known as the Mere Exposure Effect. {Tweet this} 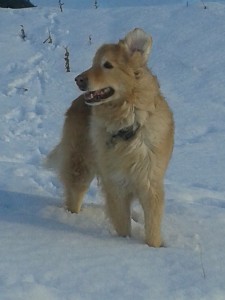 Marketing and the Familiarity Principle – My Dog in the Snow (see below!)

What is the Familiarity Principle?

In short, the familiarity principle is the tendency among human beings to develop a preference for things (be they people, products, ideas etc.) which they see more often. For instance, in relationships it tends to be the case that the more often we see someone, the more pleased we are to see that person and the more we like them – for instance a partner or child (although there are exceptions!).

Examples of the Familiarity Principle

The initial concept was first noticed by a man called Robert Zajonc, who noticed that when exposed to something new or unknown most animals exhibit a form of fear or avoidance – for instance, my dog was scared of the hoover the first time it came out, and he refused to leave the house when it snowed in his first winter with us. Many humans have a similar aversion to new styles of food for example, and I wonder if there’s anything in the popular ‘acquired taste’ refrain.

This is probably an evolutionary development – after all, things which are new or unknown may very well be predators. If this is confirmed, it can be a very hard thing to shake off. For example, I ‘hoovered’ my dog, and to this day he barks at the Dyson when it comes out – although he does settle down quickly, having established that he’s ‘safe’ on his bed in the kitchen. He occasionally pokes his head round the door, and I’ve seen him inspecting the appliance when turned off.

This is to some extent the crux of the familiarity principle. New things are, at first, potentially scary, but over time we become more accustomed to them and are willing to tolerate them, or even to re-explore. For humans, who can generally rationalise around initial fear, we become more accepting of things sub-consciously as we are exposed to them more and more. {Tweet this}

A more clinical trial of this was carried out by Zajonc, who showed meaningless Chinese characters to two groups. One group had also been shown the characters previously. When told that the characters represented adjectives, the group with prior exposure consistently gave them more positive meanings. {Tweet this}

A final example would be as follows.

Let’s say you’re in a coffee shop writing some blog posts on your laptop, and need to go to the bathroom. On the two tables opposite are a man you see 2 or 3 times a month in the same shop, and another man totally unfamiliar to you. All things being equal, you are much more likely to trust the first man with your laptop – despite the fact you know nothing about him – he could be a professional thief and he could easily walk out with it and change coffee shops. However, he is more familiar, and thus you are more positive about him, and trust him with your new Dell. {Tweet this}

Marketing and the Familiarity Principle

The impact of this principle in marketing is one of exposure. In short, the most well-known brand wins. {Tweet this}

This is true to the extent that customers will actually choose the most familiar brand, even if they know nothing else about the brand or product, and even if the better-known brand is actually inferior to a less-well-known brand also on sale. {Tweet this}

A common refrain amongst sales people is that it can take 7-8 (or more) touch points, or points of contact, before an individual is ready to buy. This is another example of the familiarity principle – the simple act of becoming more aware of and familiar with a name, brand, logo and proposition makes people increasingly likely to accept it.

This can be utilised in a number of ways, but most simply: it’s good to keep in touch with your prospects! {Tweet this}

Drip marketing is an effective way to continually put your brand in front of consumers, through email newsletters, social media, personal letters or notes at Christmas, a call if that’s appropriate. The exact right approach will depend on your business and your target market, but increasingly familiarity with your brand should always be a key consideration. {Tweet this}

Yes, that picture really is of my dog!